Ukraine is a country with a vibrant civil society and media landscape, political institutions that are growing in strength and capacity, and a rapidly growing and diversifying economy. With a population of almost 43 million people – who speak Ukrainian as well as many other languages, and represent numerous ethnic and national communities – Ukraine is diverse.

That said, Ukraine is also a country struggling with an increasingly radical and violent subset of society - one that is prepared to aggressively enforce an identity that excludes many people in Ukraine (on the basis of race and origin, political or other beliefs, sexual orientation and gender identity, or other characteristics) and attack these perceived opponents. 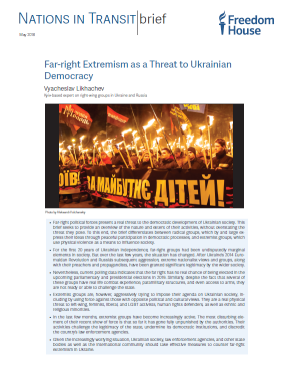 As noted in a 2018 brief on this topic (pictured right), such groups, whether political parties or other formal and informal groupings, qualify as “extremist groups” because they “reject democratic principles and resort to force to influence society and political processes.”

As this dynamic has continued, the radical extremist groups and individuals responsible for such violent and hateful acts have enjoyed pervasive impunity, due in part to haphazard and weak responses by government and law-enforcement authorities to prevent and respond to street violence. As a result, the most vulnerable groups in society that are targeted with this violence – Roma, religious minorities, LGBT+ people, and others – live in fear and without adequate protection from the state.

The strength and power of radical extremist forces must not be overstated, in particular given their low support among the public, most recently in the 2019 presidential and parliamentary elections. Yet, as noted in the 2018 brief, due to their limited success and in some cases unwillingness to participate in official politics, radical extremist groups have focused on internal questions, such as building their movement, and the “street politics” manifested in violence against people based on their identity or beliefs.

Despite their use of violence and violent singling out of vulnerable communities, the government and society’s understanding of who they are, why they form, and what they do is weak and haphazard. This makes it difficult to fully assess the threat they pose and devise responses to them and their violent ideology.

This initiative seeks to fill in those gaps by providing high-quality reporting and analysis on the groups and individuals who pose a serious threat to democratic development and pluralism in Ukraine, due to their use or support of extremist violence.

This platform will periodically publish dossiers on individuals and groups describing the actors and their connections to each other, violent incidents, their discourses and messages, and their resources and sources of support. The platform will also publish analyses on various topics and themes which shed light on the identity, activity, and ideology of radical extremists in Ukraine.

The questions guiding our research and analysis are:

The sources used for the research will include actors’ publications and websites, actors’ social media posts and communications, individual and law enforcement reports, journalistic investigations and reports, academic analyses and reports, field sources, statements from those targeted with or having observed actors’ violence and activities, and news reports. We will endeavor to cite and link directly to sources whenever possible.

This initiative is implemented and managed by Freedom House, with input from a variety of experts and authors based in Ukraine. Out of concern for the security of the authors and others involved in preparing this platform, we are unable to publish their names.

We welcome feedback and input from readers, experts, critics, and others. Please use the Contact form to get in touch.

Freedom House is a US-based non-governmental organization, founded on the core conviction that freedom flourishes in democratic nations where government are accountable to their people; the rule of law prevails; and freedoms of expression, association, and belief, as well as respect for the rights of women, minorities, and historically marginalized groups, are guaranteed. In Ukraine, Freedom House works with a broad variety of civil-society and government stakeholders in pursuit of this mission.