In 2011, Karas graduated from Taras Shevchenko National University of Kyiv, majoring in philosophy.

Karas claims he has been involved in political movements since 2006. He took part in anti-construction protests as part of the “Save Old Kyiv” initiative. He belonged to the right-wing Svoboda political party. From 2012 to 2014, he was an assistant to the Member of Parliament from Svoboda party, Andrii Ilienko. In 2014, Karas ran for the Kyiv City Council as a Svoboda candidate but lost.Vyacheslav Shramovych, “Група С14: хулігани, які ловлять сепаратистів" [Group C14: hooligans who catch separatists], July 4, 2017, BBC News Ukraine, https://www.bbc.com/ukrainian/features-40483834. Since 2014, he has been an assistant on an unpaid basis to MP Ihor Huz (represented the Popular Front party in 2014-2019; a member of the For the Future group since 2019).Karas Yevhen Vasyliovych, Posipaky, https://posipaky.info/minion/323348.

“At some point in 2008, I realized that if we want people to love Ukraine (you know, the Ukrainian language, embroidered shirts), we need to talk differently about the language. Although (talking this way) is also important, and when people's rights to language are violated, as was the case in 2010, when some girls were not hired in Kyiv in several boutiques and restaurants because they spoke Ukrainian, we responded very harshly- we broke windows, went up to them, literally intimidated them. (We did so) because Ukrainians were being terrorized."“«Може, в нашій країні так допустимо – без ляпаса по пиці хтось може не зрозуміти» - Карась” [Maybe in our country it is permissible – without a slap in the face, someone may not understand" - Karas], Hromadske Radio, October 26, 2017, https://hromadske.radio/podcasts/kyiv-donbas/mozhe-v-nashiy-krayini-tak-dopustymo-bez-lyapasa-po-pyci-htos-mozhe-ne-zrozumity-karas.

In 2013, Karas shared information about the attack by “nationalists” on the newsroom of Moscow Komsomolets, a newspaper in Moscow.“Хулігани зі "Свободи" у Москві напали на редакцію газети" [Hooligans from “Svoboda” attacked the newspaper's editorial office in Moscow], Ukraiinska Pravda, July 9, 2013, https://www.pravda.com.ua/news/2013/07/9/6993874. Karas reported the impetus for the attack as follows:

"The action of the nationalists happened in response to the involvement of Pavel Gusev, Moscow Komsomolets editor-in-chief, in the abduction and sale of Ukrainian women from Crimea into sex slavery."

From 2014 to 2015, Karas took part in the armed conflict in eastern Ukraine as part of Ukraine’s Interior Ministry’s Kyiv-2 battalion and later in the voluntary battalion Harpun.

In August 2017, Karas was stopped by patrol police in Dnipro for drunk driving, but the court closed the case on the grounds that the police had used an unauthorized breathalyzer device.Unified State Register of Court Decisions, Court Resolution № 201/12638/17, http://reyestr.court.gov.ua/Review/68948314.

In December 2018, the government of the Russian Federation sanctioned Karas.Government of the Russian Federation, Resolution № 1656, December 25, 2018, http://static.government.ru/media/files/qSyVuMSGVf6rKgETIDlFSzvCgkRyvfZt.pdf. In January 2019, the Basmanny District Court in Moscow arrested Karas in absentia for participating in the attack on the Russian embassy in Kyiv in September 2016. He was charged under Part 2, Article 360 of the Russian Criminal Code (attacking persons or institutions that enjoy international protection) and under Article 329 of the Russian Criminal Code (insulting the flag of the Russian Federation). Karas denies his involvement.Кostia Andreikovets, “Суд Москви заочно заарештував лідера «С14» за напад на посольство Росії у Києві” [Moscow court arrested “C14” leader in absentia for attack on the Russian embassy in Kyiv], Babel, January 29, 2019, https://thebabel.com.ua/news/24997-sud-moskvi-zaochno-zaareshtuvav-lidera-s14-za-napad-na-posolstvo-rosiji-u-kiyevi.

Up until January 2020, Karas used to have a blog on Censor.net.ua, an online news publication, which he used to promote C14 and express his opinions on topical political issues.Yevhen Karas, censor.net, https://censor.net.ua/blogs/all/page/1/category/0/interval/5/author/390652/sortby/date.

In interviews and blogs, Karas repeatedly made xenophobic and in particular homophobic statements.

Karas: If we are talking, for example, about representatives of large economic groups who are Jews, then they are as nationalist as we are. Of course, I don't treat them very well. But, for example, I will have a neutral attitude to a Russian in Russia, but not to a Russian somewhere in central Ukraine. I will take a nationalist attitude."“Yevhen the Daredevil”, LB.ua, April 13, 2013, https://lb.ua/society/2013/04/13/196437_ievgen_zirvigolova.html.

“If they do it at home… We are against gay parades, but we are not in favor of catching them in gay bars or at home. We are against (LGBT concerns) reaching the level of political dictates (and it leading to) various changes in the school curriculum. Few people know this: we were told about the 2012 Gay Pride, which we actively disrupted, by a representative of the LGBT community, who was against it themselves.”“«Може, в нашій країні так допустимо – без ляпаса по пиці хтось може не зрозуміти» - Карась” [Maybe in our country it is permissible – without a slap in the face, someone may not understand" - Karas], Hromadske Radio, October 26, 2017, https://hromadske.radio/podcasts/kyiv-donbas/mozhe-v-nashiy-krayini-tak-dopustymo-bez-lyapasa-po-pyci-htos-mozhe-ne-zrozumity-karas.

"There are a lot of gays (and we will consolidate them) who are against all this obscurantism. They are against ass feathers, gay parades, against changing something in schools."Тeresa Lashchiuk, “Один день з лідером «С14» Євгеном Карасем. Гра в повстанців у «ДНР», похід до парламенту і плани консолідувати геїв” [One day with “C14” leader Yevhen Karas. Rebel game in the "DPR", a parliamentary campaign, and plans to consolidate gays], Babel, January 31, 2019, https://thebabel.com.ua/texts/25073-odin-den-z-liderom-s14-yevgenom-karasem-gra-v-povstanciv-u-dnr-pohid-do-parlamentu-i-plani-konsoliduvati-gejiv.

In January 2020, he joined the working group on the observance of the rights and freedoms of imprisoned participants of war under the Ministry of Veterans, headed by another C14 member, Denys Polishchuk.“A working group has been set up under the Ministry of Veterans to protect imprisoned participants of war with the Russian Federation”, Espreso, January 19, 2020, https://espreso.tv/news/2020/01/19/pry_minveteraniv_utvoreno_robochu_grupu_iz_zakhystu_uvyaznenykh_uchasnykiv_viyny_z_rf.

In March 2021, Karas, along with a number of other C14 members, was elected to the Public Council under the Ministry of Veterans.Samuil Proskuriakov, “Праворадикали потрапили до Громадської ради при Міністерстві ветеранів України. Заборона розповідає, хто саме, та чому це проблема” [Right-wing radicals were elected to the Public Council at the Ministry of Veterans of Ukraine. Zaborona tells who they are and why it is a problem], Zaborona, March 22, 2021, https://zaborona.com/pravoradikali-potrapili-do-gromadskoyi-radi-pri-ministerstvi-veteraniv-ukrayini.

On July 25, 2021, the Big Kyiv news website published a video in which Karas and a number of other C14 members blocked the removal of machinery from a construction site, allegedly demanding $500 from the owner of the machinery for unblocking the driveway.“Євген Карась на чолі праворадикальних активістів вимагає гроші у будівельників. А що у його декларації? Розслідування «Великого Києва» (ВІДЕО)” [Yevhen Karas, along with right-wing radical activists, is demanding money from construction workers. What is in his declaration? Investigation by the “Big Kyiv” (VIDEO)], Big Kyiv, July 25, 2021, https://bigkyiv.com.ua/yevgen-karas-na-choli-pravoradykalnyh-aktyvistiv-vymagaye-groshi-u-budivelnykiv-a-shho-u-jogo-deklaracziyi-rozsliduvannya-velykogo-kyyeva-video. 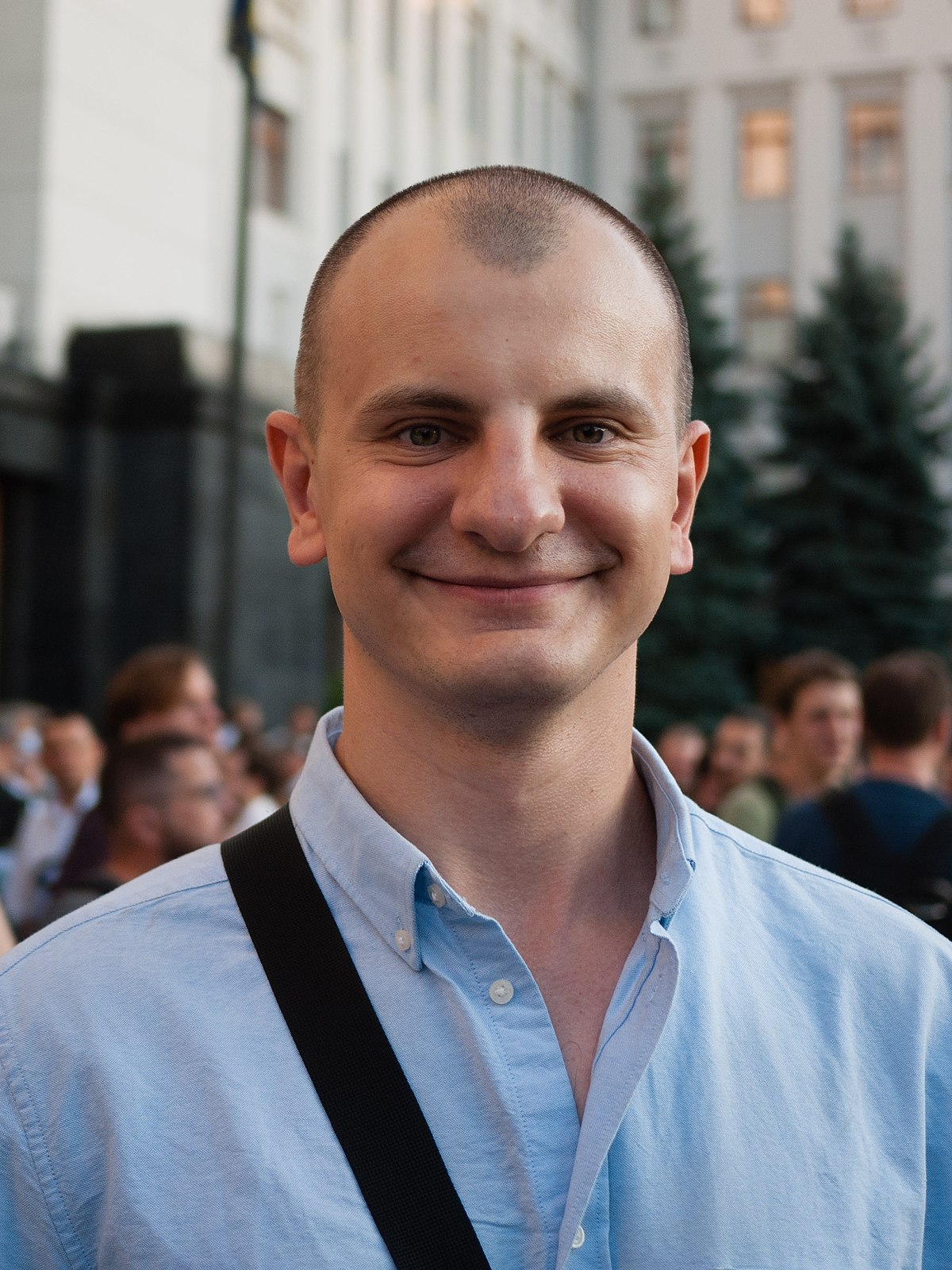