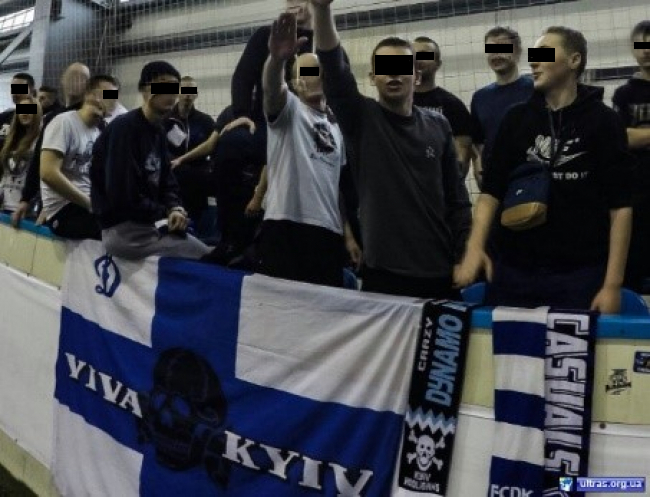 The Nazi salute, Hitler salute, or Sieg Heil salute, is also known as “Ziguvannya” in Ukrainian slang and “Throwing a Sieg” in English slang. It is sometimes inaccurately referred to as the Roman salute, though this is a separate symbol.

Sometimes the exclamation "Zip file” is used because it sounds similar to "Sieg Heil." The number 88, the abbreviation HH (which stands for "Heil Hitler") and the inscription "Zip file" are also sometimes used as codes for this greeting.

According to Nazi literature, this salute is how the ancient Germans congratulated a new king, however Nazi literature does not present any evidence to back up this claim. It is most likely copied from the Roman salute used by Italian fascists. Beginning in the 1920s, “Sieg Heil” was the Nazi party salute, which went on to become a common greeting and later a mandatory Wehrmacht salute. As a rule, the phrases “Heil Hitler” («Хайль Гітлер») and “Sieg Heil” («Зіґ Хайль») are typically transliterated rather than translated into Ukrainian.

The salute involves raising one’s right hand with its outstretched palm directed upwards at a 45-degree angle, while simultaneously exclaiming "Heil Hitler,” "Heil" or the unofficial version of the greeting, "Sieg Heil.”

A similar salute, the Bellamy salute, was used in the United States to swear allegiance to the flag but was abolished in 1942 because of its resemblance to fascist and Nazi salutes.

Right-wing radicals widely use the Nazi salute as a greeting and an expression of their commitment to Nazi, neo-Nazi, and fascist ideologies, as well as Hitler's Germany.

In Ukraine, it is used quite commonly as a public declaration of commitment to Nazism, neo-Nazism, fascism, and Hitler's Germany.

In rare cases, the word “Heil” is combined with the names of other figures from the Third Reich, or other anti-democratic regimes and organizations, or with the name a particular organization itself (rather than saying “Heil Hitler”).

This exclamation is used mistakenly extremely rarely. While the Nazi salute is sometimes performed as a joke, the person doing it typically knows its meaning.

The gesture itself can be difficult to identify and/or easy to confuse with other gestures, especially in photographs. As such, it is extremely important to consider the circumstances in which it is being used and to look for other hate symbols (such as tattoos or images on clothing) to determine whether the person using it is doing so deliberately. A key indicator that it is being performed on purpose is when the Nazi salute gesture is accompanied by the exclamation.

These exclamations are also used without the accompanying gesture. The exclamation "Heil" can be translated as "salvation,” "good," and "well-being" and is part of many German greetings. The exclamation "Sieg" translates as "victory" and is often used by German-speaking people in this sense, including in chants. That said, German greetings are not commonly used in Ukraine and as such, shouting “Heil” or “Sieg” — even without mentioning Hitler’s name — can be considered a hate symbol and an indication that the person using the expressions identifies with Nazi ideology.